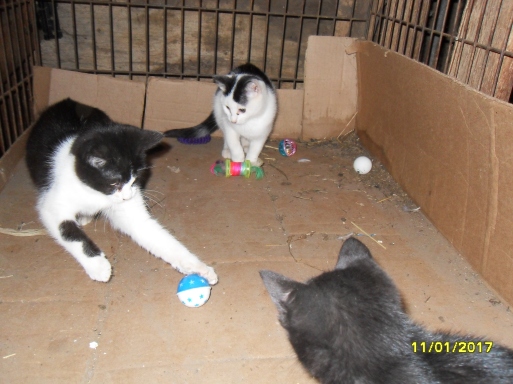 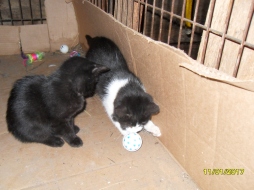 When I first brought my kitties home I kept them in a large kennel for a few days until they got used to the barn, only letting them out when I was in the barn to keep an eye on them. Once I felt comfortable that they would be alright I left the kennel open so they could come and go when they wanted, but continued to have their bed and food bowl in the kennel. For a while now I have been feeding them in the feed room near Tiggy’s eating area and they have started sleeping in one of the hay mangers. I’ve been wanting to remove the kennel altogether, but after seeing this tonight I might leave it a while longer. The kittens were all in there playing “soccer”. They were batting their toy balls back and forth to each other, pouncing, playing. Even Albert, who will occasionally wrestle with Cookie, but otherwise seems to feel he is too mature to play with “the children”. I have to keep their toys contained because the sheep would crush them, plus I would probably trip over them and crack my ass. The kennel gives them plenty of room to chase their toys and the cardboard I put in the bottom to protect their feet allows the balls to roll really well. They were having so much fun playing together. It was great.