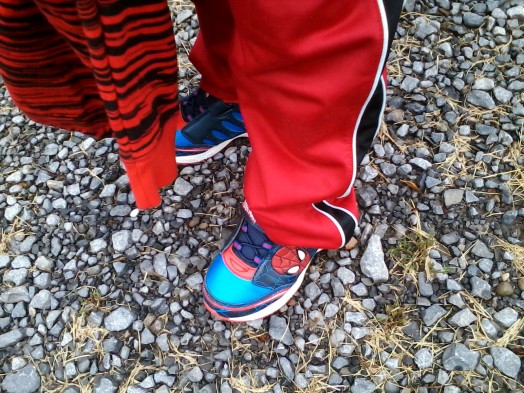 I did not get to see my nephew get on the bus at his house this morning, but did get to see him get off the bus at our house this afternoon. Wearing him new Spider Man shirt and his way cool Spider Man sneakers. But he did not seem at all happy. His grandma and I were asking him all kind of questions about his first day back and he would only answer with grunts. Well THIS isn’t a good sign…

Seriously concerned that something terrible had happened I began my interrogation. After putting him on the rack and applying the thumb screws I finally got the following answwers;

He likes his new teacher.

Lunch was cheeseburgers and cheese fries with cheese and ketchup.

He also had chocolate milk for lunch, which isn’t the best milk (Say WHAT?!?!) but they didn’t have strawberry milk today.

He sat next to his friend Kale at lunch.

He doesn’t have homework tonight.

He didn’t learn anything at school today.

So that’s that. The whole school year is now ruined! Oh, the humanity! And then, to top it all off, he had to stay in the house with grandma and grandpa instead of coming to the barn with me because he had his new school clothes on. I do believe the world is coming to an end!

One thought on “First day of first grade”