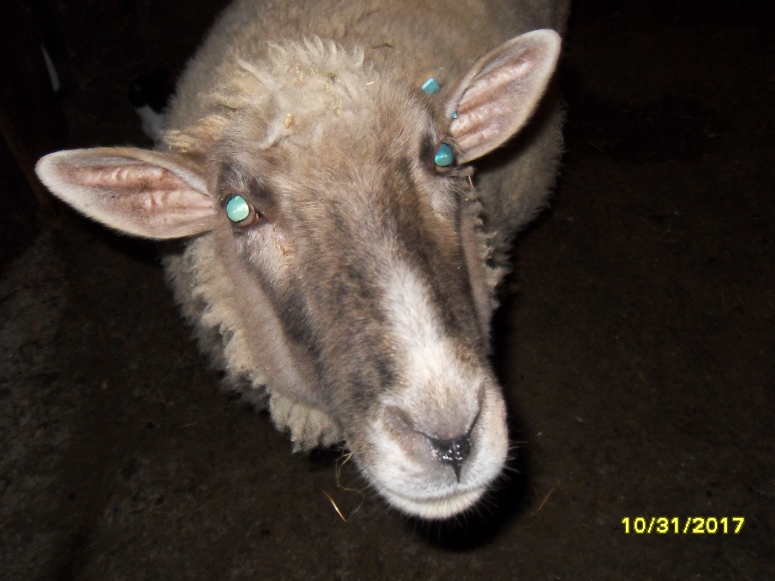 I got no pleasure from it, but immense satisfaction.

In the photo is Bear, one of my favorite sheep. When I first started helping with the sheep they all looked alike to me. I didn’t know them, they didn’t know me and they were all very skittish around me. Bear was my very first sheep friend. She came to me long before any of the others. I learned her face when I couldn’t recognize any of the others. She has been my cuddle buddy for years, now. She even ran interference for me when our last ram was trying to kill me. When he was backing up to make a charge at me she would stand between us and slow his momentum. She is sometimes a pain right in the ass begging for scratches.

She has not lambed for 2 years now. I am firmly convinced it’s because she refused to breed with Riley because she didn’t like how mean he was to me. Sissy keeps threatening to send her to auction because she hasn’t bred. I am fighting her on it, and she is probably only joking. But when opportunity presented tonight, I didn’t want to take any chances.

I noticed Spaulding showing a lot of interest in Bear when I let the sheep out today. A few visits to the barnyard during chore time showed Spaulding wanting desperately to  get close to her with Bear trying desperately to keep away from him. Every time I checked Spaulding was curling his lip and chasing Bear. Bear was giving him mixed signals, occasionally squatting to pee in front of him so he could smell the hormones but then running away. She was definitely in heat, but would not stand for him.

I want Bear to lamb this year. Very much. Not just so Sissy won’t have an excuse to sell her. I also want more Bear offspring. Her lambs, grand lambs, and great grand lamps are (in my opinion) some of the nicest sheep we have.

I texted Sissy that Bear wouldn’t stand for Spaulding, while clearly in heat. Sissy texted back that maybe she is a lesbian. It could happen, but in Bear’s case I have never observed homosexual activity on her part. What I have observed is what I believe could be called humaniality. Every day she drives me nuts, begging for lovin’. Like beastiality in reverse.

So, when she ran over for scratches after eating her supper tonight I knelt down and put my arms around her neck to scratch her back. She rested her head on my shoulder and just enjoyed the scratching. Spaulding was right behind her, sniffing and looking frustrated. When he realized Bear was not running from him it was clear he did not want to waste the opportunity, but was hesitant because I was right there. I found just the right spot on Bear’s back to make her start swaying back and forth and chomp her lips. That was too much for Spaulding. He literally jumped into action. Bear stiffened as if to run for a second, but I just scratched a little harder and she decided to stay put. It was a new perspective for me, looking a ram right in the face from inches away while he did his job. Twice more before I left the barn for the night Bear asked for scratches and I held her while Spaulding made sperm deposits. I don’t know about the sheep, but I feel kinda dirty. But if those 3-ways got enough sperm into Bear to make a lamb or two, it was totally worth it!

Spaulding and Frannie, making a lamb.

We are currently without a ram. We sold Riley at the end of last breeding season. He was with us for 2 seasons and had to go because otherwise he would have been breeding his own grand daughters. He also had to go because he was a true asshole of a sheep.

This is him, giving me the evil eye over the fence, angry because he couldn’t get to me through the fence. He was TERRIBLE! Most rams will butt their heads against people, especially when they are in rut. But Riley liked to get a running start! 350 pounds of testosterone charging at me full speed. Not fun. He had me down in the barn several times and once in the pasture when I thought he was trying to kill me. Not only was he an ass to me, he was a bully to the ewes as well. Fat as they are, he outweighed them all by at least 100 pounds and he was always throwing his weight around with them. About 1/3 of the flock would not stand for him. The only reason we kept him for 2 years is because he sired such big, beautiful lambs and lots of twins. But when it was time for him to go I said, “Buh-bye, now!” without remorse.

However, breeding season has begun and we do not have a replacement yet. Sissy insists on getting another Tunis ram. They are not common in the area. So it has taken her a while to line up a purchase and delivery. I would actually prefer some other breed. I like the variety we get from hybrids. I would love to see the lambs we might get from a Lincoln or a Romney. But she wants a Tunis, so we wait. Our new guy is supposed to be here next weekend.

In the meantime the girls are getting quite impatient. They want action now! I am seeing a lot of head butting between the ewes. And the 2 ram lambs we are trying to fatten up are trying like heck to get in on the action. They can’t quite reach, but they keep trying to mount. I expect them to ask me for a foot stool any day.

This is Maggie Mae. She has always been a beggar for back scratches. These last couple weeks she has not been begging for back scratches. She has been DEMANDING butt scratches. If I don’t comply she starts rubbing her butt against my leg. I keep telling her, “This is not appropriate behavior!” She doesn’t care. I am starting to feel uncomfortable…